Essential Question:
"How were Religious revivals and reforms related and how did these events help change the fabric of american society?"

﻿ Explore the link about﻿ the Women's Rights Movement.

Check out this website and find out more about the abolitionists and the Underground Railroad.

Life of a slave

The Temperance Movement:  By 1830, the average American over 15 years old consumed nearly seven gallons of pure alcohol a year – three times as much as we drink today – and alcohol abuse (primarily by men) was wreaking havoc on the lives of many, particularly in an age when women had few legal rights and were utterly dependent on their husbands for sustenance and support.

The Temperance Movement The country's first serious anti-alcohol movement grew out of a fervor for reform that swept the nation in the 1830s and 1840s. Many abolitionists fighting to rid the country of slavery came to see drink as an equally great evil to be eradicated – if America were ever to be fully cleansed of sin. The temperance movement, rooted in America's Protestant churches, first urged moderation, then encouraged drinkers to help each other to resist temptation, and ultimately demanded that local, state, and national governments prohibit alcohol outright. 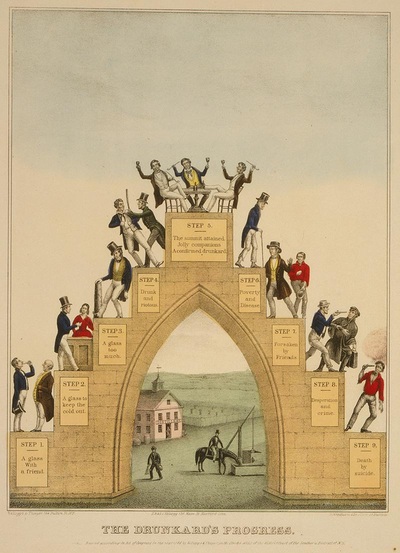 ﻿The Drunkard's Progress Cartoon Explained:
Step 1: A glass with a friend. Step 2: A glass to keep the cold out. Step 3: A glass too much (weaving). Step 4: Drunk and riotous (policeman with club”). Step 5: The summit attained…Jolly companions…A confirmed drunkard. Step 6: Poverty and Disease (with cane). Step 7: Forsaken by Friends. Step 8: Desperation and crime (with gun). Step 9: Death by suicide.” Early 19th century Temperance painting.  Fear, laced with appeals to the conscience, was the main weapon of temperance leaders of this period and later who endeavored to make Americans forswear the bottle.   The rise of social disorder, with burgeoning slums, impoverished families, increases in crime, prostitution and Sabbath-breaking, was seen by many as the result of drink.  Aside from the penitentiary and its supposed influence through fear, another means of crime prevention was the temperance movement.  “Drink is the cause: stop crime and poverty at their source.”  Temperance tales paint the drinker as not only immoral and sinful but also unsuccessful: the drunkard loses devotion to work, his reputation for reliability, and his job.﻿